The distribution of breeding grounds is restricted to areas of eastern and central Europe, between the 47th N and 59th N parallels.

The distribution of breeding grounds is restricted to areas of eastern and central Europe, between the 47th N and 59th N parallels. The breeding areas have become restricted owing to loss of habitat. This species became extinct in Europe in the 20th century (its breeding grounds used to include France, Belgium, Holland, Austria, Italy and the former Federal Republic of Germany, Yugoslavia and Czechoslovakia). Today, it breeds regularly in Byelorussia, Lithuania, Poland and Ukraine. World population is estimated at 9,000 – 13,800 male songbirds, equivalent to 27,000 – 41,400 individuals. The breeding grounds for 98% of the species are limited to three countries: Poland, Byelorussia and Ukraine, and 80% of the population is found at less than 40 different locations, which, in terms of conservation, is critical.

With regard to migration, sightings of the aquatic warbler have been reported in 13 European countries, chiefly in the west and south-west of the continent. This species spends the winter in western sub-Saharan Africa. To date, the two known wintering locations for this warbler are located in the Senegal delta, in the environs of the Djoudj National Park (Senegal) and at the inner delta of the river Niger, in Mali. 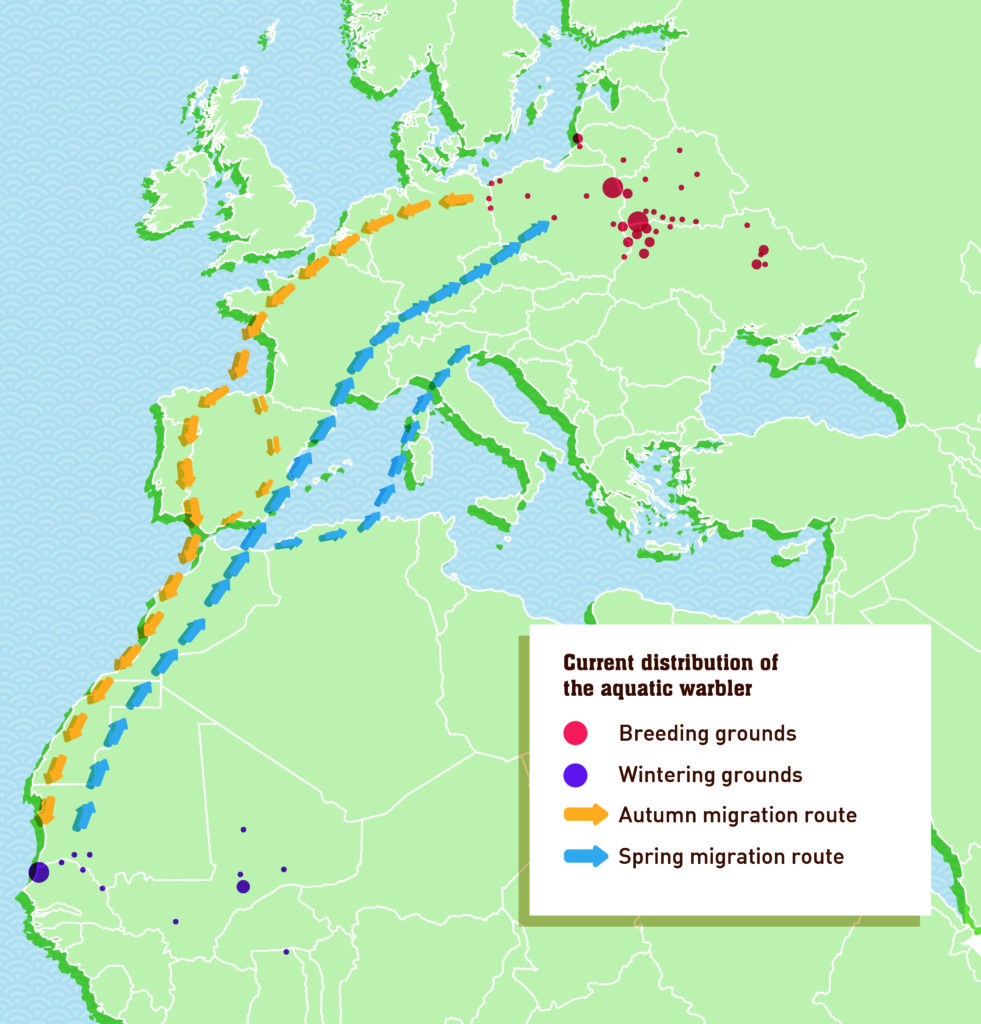 This small insectivorous bird’s habitat is highly specific and vulnerable. Its habitat consists of open wetlands with low marshland vegetation and shallow water up to 10 cm deep, known as fen mires. This habitat type is found in wetlands and flood plains dominated by low-growth marsh and helophytic herbaceous species of the genera Carex, Cladium or Molinia, among others, with occasional trees and scrub used by males for exhibition and territorial marking.

In addition, owing to this species’ breeding strategy, its habitat must contain an abundance of insects and arachnids, as these are their main food source.

Overall, during the migratory and wintering periods, the aquatic warbler is also selective with regard to the habitat it needs, similar in many aspects to its chosen breeding grounds. The species thrives in wetlands covered in herbaceous or marsh vegetation, such as extensions of Carex, Juncus, Eleocharis, Scirpus or formations of Phragmites australis reeds and great fen-sedge or Cladium mariscus, on coastal or inland wetlands. Nevertheless, this species is sometimes found to frequent other vegetation types, such as irrigated crops or salicornia formations.

The aquatic warbler has developed a rather singular system of reproduction for such a small bird. The reproductory strategy combines polygyny and promiscuity, i.e., males establish territorial limits within which they mate with several females (polygyny), while females generally copulate with several males (promiscuity), commonly leading to eggs fertilized by different sires in each nest. A most curious trait in this species is that only the female incubates and raises the clutch while the male remains fully oblivious of the task of caring for the chicks. This strategy appears to be positive provided the birds live in extensive and productive surroundings, as the females need to find an abundance of readily available food and a large territory in which to conduct the tasks usually shared with the male. It is even customary for the female to lay a second clutch if the environment is sufficiently favourable.

The nest is built close to the ground, hidden in the dense vegetation. The female usually selects the nesting location, and builds a hollow of grasses, leaves and cobwebs that is sometimes covered with a canopy of grass. She lays from three to six eggs, averaging five per nest, and more than half of the hatched birds accomplish flight.

The diet is composed of arthropods, mainly diptera (mosquitos), arachnids (spiders), odonata (dragonflies) and lepidopotera (moths). These make up around 70% of their prey.