The disappearance of the wetlands used during their life-cycle, and the fact that this species is specialised in these environments and not in others, is the main cause of its poor conservation status. 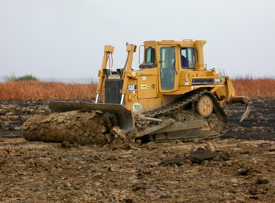 This species’ biological traits provide us with the direct causes of its decline. During the 20th century, the population size and area of distribution suffered a drastic 95% decrease as a result of the rapid destruction of its habitat. The disappearance of the wetlands used during their life-cycle, and the fact that this species is specialised in these environments and not in others, is the main cause of its poor conservation status.

The principal threats to the aquatic warbler in its breeding grounds have been described as direct habitat loss due to drainage and water channelling in the wetlands, changes in farming uses owing mainly to the abandonment of traditional livestock farming and increased intensive agricultural practices that favour the development of reed banks, scrub and forest species which are not suitable for these birds. The practice of uncontrolled burns and loss of water quality due to agricultural or industrial waste during the breeding season also cause habitat loss in the medium term.

Less well-known are the hazards encountered on their migration paths and wintering grounds, but their degradation and loss may impact these small birds’ survival in the long run.

All these threats have led to the aquatic warbler being catalogued as a species threatened worldwide (globally vulnerable) and as the most endangered passerine in continental Europe (classed as ‘Endangered’ at the European level). It is included in Annex I to the Birds Directive, in Annex II to the Berne Convention and in Annex II to the Bonn Convention.

Furthermore, in recent years, the European Action Plan has been updated to analyse the principal threats to this species and to define priorities for conservation, to be deployed by the countries involved in its management. Likewise, an international working group has been set up within Birdlife International, the Aquatic Warbler Conservation Team, to promote the implementation of plans to monitor and study the species’ populations and the enforcement of national and international laws referring to the conservation of the aquatic warbler.